Pinyin is the Romanization of the Chinese characters based on their pronunciation. In Mandarin Chinese, the phrase “Pin Yin” literally translates into “spell sound.” In other words, spelling out Chinese phrases with letters from the English alphabet. For example:

Historically, Pinyin started as a means of explaining Chinese to Western learners. It wasn’t until the Qing Dynasty that Chinese people really started considering adopting a form of spelling in their writing system. According to some scholars, the beginnings of Pinyin were derived after the Chinese observed the Romaji system and Western learning in Japan.

The Chinese government did not officially recognize this language form until the 1950s, when it became a project headed by Zhou Youguang and a team of linguists. It was then introduced in elementary school in order to improve literacy rates as well as help standardize the pronunciation of Chinese characters.

In the digital age, Pinyin has become exceedingly useful, as it is the most popular and common way to type out Chinese characters on a typical keyboard. Touch-screen devices allow you to draw out the character, which is often unreliable (depending on how bad your handwriting is) and more time consuming. 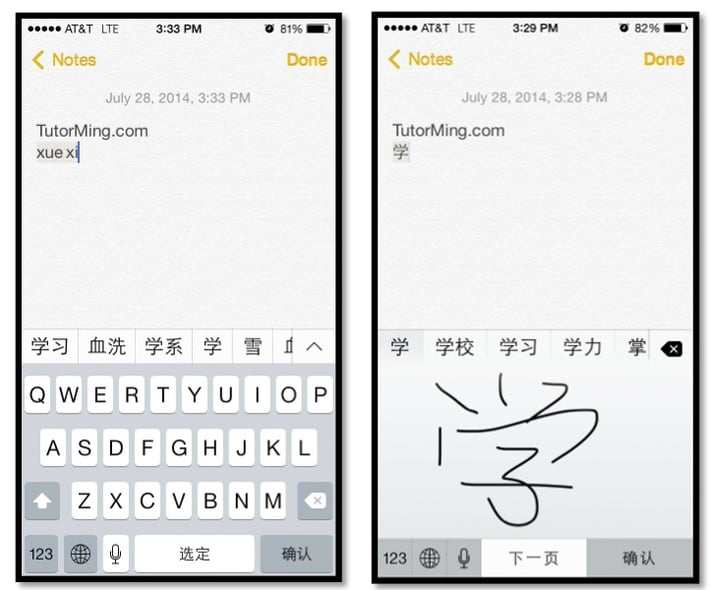 To those without any knowledge of the Chinese language, Pinyin can look confusing. There are many combinations of letters that do not exist in English. For example, words like “xi,” “qie,” and “cui.” In addition to that, many letters are pronounced differently than they are English. “C” in Chinese is pronounced like the “ts” sound in “grits” as opposed to the “k” sound it makes in English.

When learning Pinyin, you should discard any rules you think you know about languages that use the English alphabet. Xi and Si look like they rhyme, right? Wrong! Xi is pronounced a little like “see / shee,” whereas “Si” is pronounced closer to “sih / suh.”

To make things even more complicated, there are also four tones in Mandarin that help clarify meanings in words. When written, accent marks or numbers are often used to denote the tone. They are listed below:

Imagine the tone of your voice if you were asked to sing a pitch, “aaaaah.”

Imagine the tone of your voice when you ask a question, such as “Huh?”

Imagine the tone of your voice when you say the word “meow.”

Imagine the tone of your voice when you say an order, such as “Stop!”

Improper usage of the tone can result in completely different words. For example, shuǐ jiǎo (dumpling) and shuì jiào (sleep) have the same spelling, but different tones. It can make for an awkward moment if you accidently ask your waitress to sleep with you instead of asking for some dumplings.

Some words sound exactly the same, with the same tone and spelling, but have different meanings. “猪 (zhū)” means “pig,” but “珠 (zhū)” means “pearl.” These are known as homophones.

If you were wondering: yes, it is possible to read and understand text written in pure Pinyin. Yet it is highly unlikely that they will ever completely replace Chinese characters. There is too much tradition and pride in the culture of the language. Chinese characters have persisted for thousands of years for a reason, and will continue to exist thousands of years from now.

Related: Why There Is No Chinese Alphabet

Should you learn Pinyin when you are learning Chinese? Absolutely. Pinyin can help reinforce your memory on the pronunciation of certain phrases. It will also go a long way in helping you type out Chinese words and look up phrases you don’t know. Chinese dictionaries are extremely unforgiving to those who can’t read Pinyin.

However, much like English, there are some exceptions to how Pinyin looks on the page to how it sounds. One of them is the common greeting, “nǐ hǎo” or, “hello.” Despite being written with two third tones, the first character is pronounced with a second tone “ní.”

In conclusion, the best way to master Chinese, Pinyin included, is to practice speaking.