As coronavirus spreads through the rest of the world, China has reported a slowdown in its number of new infections.

On Monday, the country revealed it had just 19 new cases – which is the lowest number since mid-January – after the outbreak back in December.

The day before, it had 40 new cases of coronavirus.

It also marked the third straight day of no new domestically transmitted cases in mainland China outside of Hubei province, where Wuhan is located.

As the crackdown on the virus continues, President Xi Jinping made his first visit to Wuhan where he praised medical staff for their efforts.

What is the number of cases of COVID-19 in China currently?

The number of cases in China rose consistently until the beginning of February, when its efforts to combat the virus began working.

But on February 13, the central province of Hubei then adopted a new diagnostic method that included clinical diagnoses in its official statistics.

That caused the number of new cases to peak at more than 15,000.

Cases then decreased the following day, before resuming the downward trend.

Why is the rate of COVID-19 slowing down in China?

In recent weeks, the number of daily new cases in China has gone from almost 2,000 in February to under 100.

Once the news broke of the virus and its dangers, China threw itself into recovery mode at an alarmingly quick pace.

Two specialist hospitals were built in Wuhan in just over a week, many routine hospital provisions were transferred to online platforms, and a 5G platform was rolled out allowing real-time contact and support for investigators in the field – even in remote areas.

Technology also included surveillance through phone apps such as WeChat to trace contacts of confirmed cases as well as making sure travel restrictions were obeyed. Events were cancelled, leisure facilities were closed and business in the world’s second-largest economy stopped.

In February, experts from the World Health Organisation and China, Dr Bruce Aylward and Dr Wannian Liang, published a report detailing the country’s reaction to the illness.

It praised China’s reaction and earmarked the following things as key combating tools which has helped reduce the rise in cases:

How are their efforts working?

Dr Liang and Dr Aylward’s report stated: “In the face of a previously unknown virus, China has rolled out perhaps the most ambitious, agile and aggressive disease containment effort in history.

“The strategy that underpinned this containment effort was initially a national approach that promoted universal temperature monitoring, masking, and hand washing.

“However, as the outbreak evolved, and knowledge was gained, a science and risk-based approach was taken to tailor implementation.

“Specific containment measures were adjusted to the provincial, county and even community context, the capacity of the setting, and the nature of novel coronavirus transmission there.” 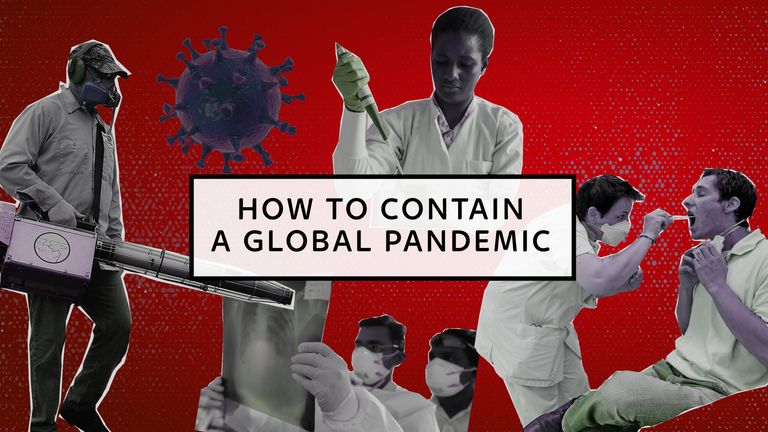 China is already working hard to return to a full state of normalcy following the outbreak.

Schools are reopening, people are returning to work and its makeshift hospitals are continuing to be closed as the number of active cases drops.

Commodity market analyst He Tianyu said factories in China are now coming back online and aiming for an increase in demand again.

“The semi-fabricator industry is improving slowly,” he said, adding that demand from the construction and infrastructure sectors was also improving, albeit at a slower pace.

Why is President Xi Jinping’s visit such a turning point?

As other political leaders are withdrawing from public spaces for fear of the virus – such as the prime minister of India missing the country’s annual Holi celebration – the president marked a new dawn as he visited frontline workers in Wuhan to praise them for their efforts.

Professor Zhang Ming, of Renmin University, said: “It is obvious that Xi could not have visited Wuhan earlier because the risk of him contracting the virus there was initially too high.

“He is there now to reap the harvest. His being there means the CCP (Chinese Communist Party) may declare victory against the virus soon.”

China was criticised over its early response to the outbreak, due to it suppressing information and downplaying risks, but its draconian efforts at control, including the lockdown of Wuhan and Hubei province, have been effective at curbing the spread.

Xi, who was mostly absent from Chinese state media coverage of the crisis in its early days, has become far more visible in recent weeks.